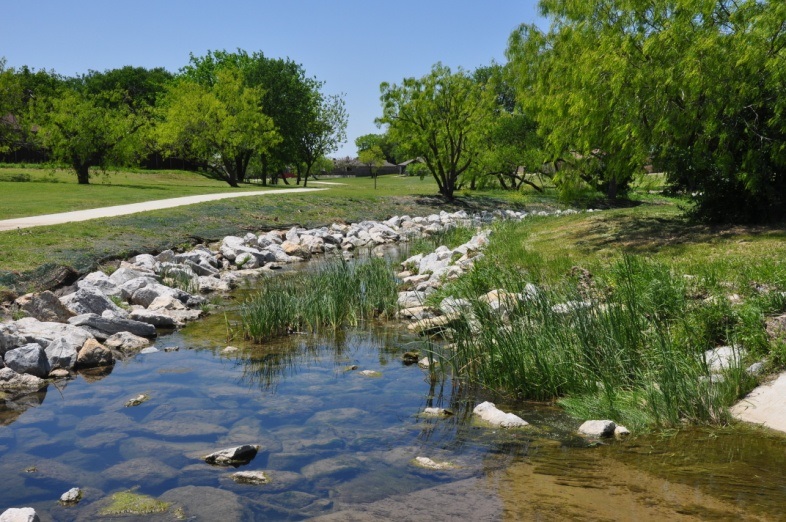 Carrollton, TX – Carrollton has been awarded the 2013 Public Works Project of the Year Award by the Texas Public Works Association (TPWA) in the division of projects “$2 million, but less than $5 million” for the environment category. The award is for the Furneaux Creek 5 Channel Improvement Project.

The Furneaux Creek 5 Channel Improvement Project consisted of the rehabilitation of a section of a severely eroding creek and construction of a trail through a greenbelt on the northeast side of the City of Carrollton. The channel had experienced severe erosion over the years due to the soil conditions and high velocities. Areas downstream had been armored in prior projects, but with the changing requirements of the Clean Water Act, simply extending the downstream design through this segment was not feasible. The erosion produced a safety hazard to the public as well as undermining several large trees along the channel. The goals of this project were to reduce channel erosion, improve wildlife habitat/create an urban oasis, improve and encourage access to the greenbelt through the addition of a trail that expands the City’s trail system, meet federal requirements of the Clean Water Act, and maintain flood carrying capacity.
As part of this project, the City’s trail system was extended through the greenbelt, a 5,000 foot expansion of the system. In addition to the traditional pedestrian bridge spanning the channel, several low water crossings were included as low cost opportunities to improve access across the creek.

At a cost of $2.9 million in construction and $400,000 in design, this project met and exceeded all goals set. The trails are being used extensively by the public, as the area has proven to be wonderful for nature walks and recreation. The channel is safe and stable, with reduced maintenance requirements both along this segment and in water bodies downstream.

“This project continues our ongoing efforts towards creek stability while simultaneously adding quality of life elements; in this case, a hike and bike trail,” commented Cesar Molina, Carrollton’s Director of Engineering.

Design of this channel began in 2007 with the execution of a contract with Nathan D. Maier Consulting Engineers (NDMCE). The lead engineer for the project, Bill Wallace, P. E., Executive Vice President, provided channel analysis, design, and permitting services. The improvement project began in November 2010 and was officially complete in November 2012. The project was funded by the proceeds of bond sales approved by the voters in 2004.
Carrollton also received the 2010 TPWA Public Works Project of the Year for the North Transmission Water Line project, the 2011 TPWA Public Works Project of the Year Awards in two different categories, for the Columbian Club Pump Rehabilitation and the South Main Street Reconstruction project, and the 2012 TPWA Public Works Project of the Year Award for the Fyke Road Lift Station Rehabilitation.

Mike McKay, Civil Engineering Division Manager will be recognized at the 2013 TPWA Annual Conference Awards Banquet on Friday, June 7 on behalf of the City of Carrollton. For more information about the projects, call 972-466-4230.
Return to full list >>
View Full Site
mangakakalot