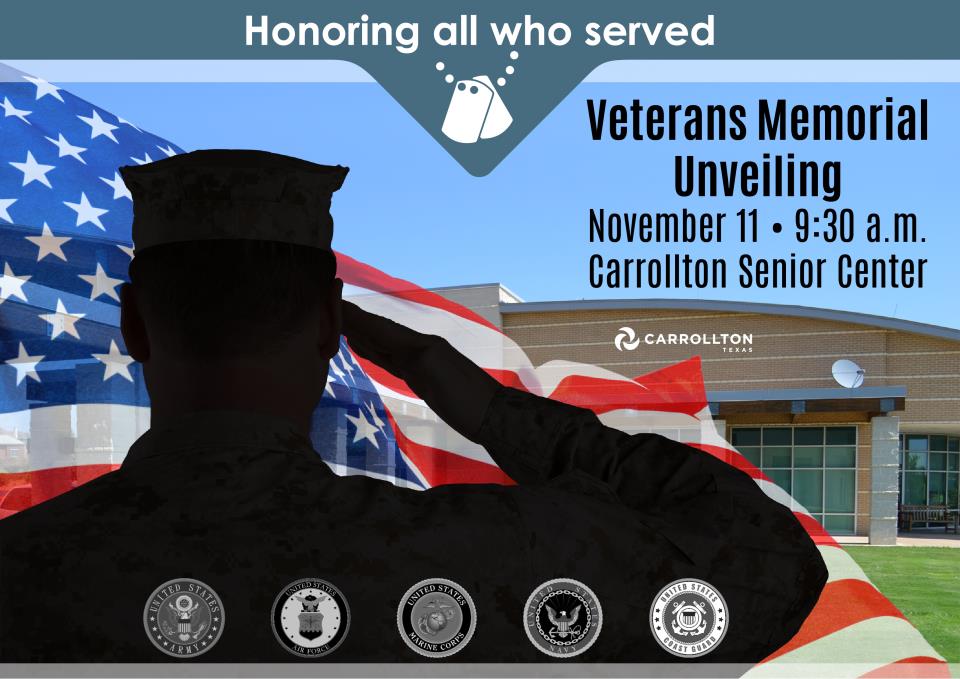 The City of Carrollton is dedicated to honoring the service members who make their home in our community. To acknowledge the sacrifices of our armed service men and women, City Council will unveil a newly constructed veterans memorial in a public ceremony at 9:30 a.m. on Friday, November 11.

The ceremony will feature the Blanton Elementary Kids Choir and the R.L. Turner High School NJROTC Color Guard. City officials, including councilmember Bob Garza who spearheaded the effort, will be in attendance as well as a staffer from the office of State Representative Ron Simmons.

“Placing a memorial monument by the Senior Center was a great fit as many of the seniors visiting the center on a daily basis are veterans,” Garza said. “The location made sense in that it would also add to the Veterans Luncheon and 4th of July celebration held there annually.”

The monument reinforces the commitment of the City in recognizing all Carrollton veterans. The Senior Center Advisory Council also had a hand in planning the project. The Council will care for and maintain the integrity of the monument as a piece of the community.

“From the day I campaigned for a seat on City Council six years ago, I publicly stated I had three areas of focus: underprivileged kids, the elderly, and veterans,” Garza said explaining his motivation. “Over the course of several years, I toured several cities and saw what they had done to honor their veterans. So I began to formulate a plan to honor our Carrollton veterans. I can proudly say that the council members unanimously agreed and staff did a great job of making it happen.”

Garza, a U.S. Air Force Helicopter Crew Chief who served in Vietnam, said the monument makes him proud of our City and our veterans.

“It is my hope that the monument serves as a symbol of gratitude the citizens of Carrollton possess for all those who have served and are currently serving their country, state, and city,” Garza said.

The unveiling ceremony, open to the public, will take place at the Carrollton Senior Center (1720 Keller Springs Road). It will begin at 9:30 a.m. and last approximately one hour. A Veterans Luncheon & Concert is scheduled for 11 a.m. following the ceremony. The luncheon is a ticketed event open to veterans and widows of veterans and their guests. For more information, call 972-466-4850.