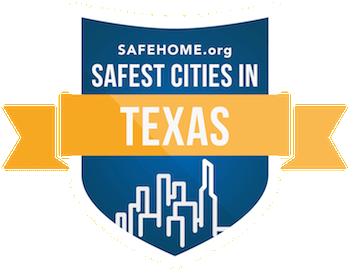 The City of Carrollton ranked 22nd out of 65 on Safe Home’s 2017 list of Safest Cities in Texas with a score of 80.43. Of the 65 cities in the study—those with a population of 50,000 or more—24 have a safety score of at least 80 further indicating Carrollton’s longstanding commitment to public safety.

Safe Home, a security review site, used a variety of data sources to calculate safety scores for each of the cities including the FBI's latest report on how many and what types of crimes occurred, crime trends, law enforcement officer ratio, demographics, population density, unemployment rate, income, and education level.

Other cities in DFW including Allen, Flower Mound, Lewisville, McKinney, and Plano also made the list. Dallas is ranked 45th safest city in Texas according to the list, with a score of 70.85. Capital city Austin came in 49th with a score of 70.3.

Safe Home recognized Texas overall as a very safe place to live with crime rates that remain low in areas of dense populations compared to other states.

“Four of the state’s safest cities made it to the top 100 safest cities on the national level,” the article states. “If you are looking to be situated in a state that’s pretty safe with ample opportunities and things to see, you won’t go wrong with Texas.”

Earlier this year, the Texas Department of Public Safety released its 2016 Crime in Texas report showing a strong history of safety in Carrollton. According to the report, Carrollton has a comparable crime ranking to that of suburban cities located in Collin County and the lowest ranking of the larger cities in all of Dallas, Denton, and Tarrant Counties.

“Our focus is to make Carrollton a safe place,” said City of Carrollton Director of Public Safety Rex Redden. “The men and women who serve this community do so with pride because we can see the results of our efforts. Carrollton continues to rank on public safety lists, both statewide and nationally.”

For more information about the City of Carrollton, visit cityofcarrollton.com.