Carrollton Ranked One of the Safest Cities in Texas 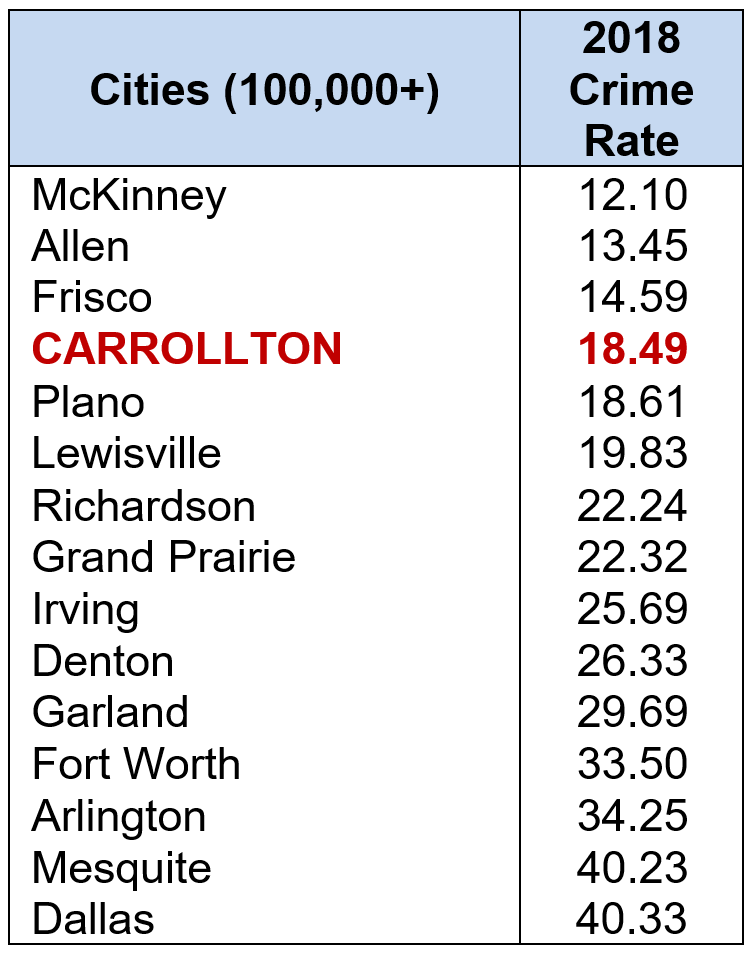 The City of Carrollton continues to experience one of the lowest rates of crime among surrounding cities of comparable size in North Texas.

The Texas Department of Public Safety recently released its Crime in Texas report for 2018, a compilation of crime data published annually that enables cities to compare crimes and crime trends across jurisdictions.

In comparison with similarly-sized cities within the North Texas jurisdiction — those with populations of more than 100,000 — Carrollton’s numbers are the fourth lowest. According to the report, Carrollton has the lowest crime rate of any city over 100,000 people in both Dallas and Denton County.

“The highest percentage of crime in Carrollton is related to property crime: theft primarily, but also burglaries of homes and vehicles,” Redden said. “The most important part of keeping the crime rate low is for residents to not get complacent. Carrollton is a safe community, but in order to keep valuables secure, doors must be locked, garage doors kept closed, and property not left out in the open. Removing the opportunity for a crime to occur will greatly reduce the risk of becoming a crime victim.”

“The significance of this comparison is that the information source is the Texas Department of Public Safety, which provides a single statistical compilation method to compare crime occurrences in all Texas cities,” Assistant City Manager Marc Guy said. “Based upon the standardized crime report, Carrollton's overall Part 1 index crime rate has stayed relatively the same compared to 2017 and has declined by more than 28 percent since 2012 in the same crime categories.” 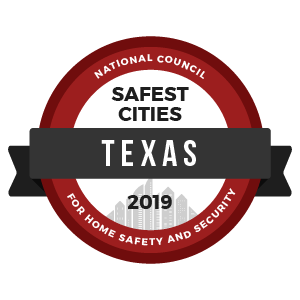 Similar rankings were found in a 2019 study conducted by the National Council for Home Safety and Security. The study factored 7,639 Texas cities in the ranking with populations ranging from 7,639 to 4,007,147. Carrollton was ranked at number 58 with a crime rating of 17.523.

The study listed the City of Carrollton as one of the Safest Cities in Texas in 2019 with the fourth lowest crime rate among its comparably-sized cities in North Texas.

Carrollton Police Chief Derick Miller commended his officers for not only keeping Carrollton safe, but for doing so in what has become a very difficult law-enforcement landscape over the past two years with regard to unfunded mandates of the state and federal governments.

Despite the challenges, Miller said, the Carrollton Police Department has stood firm in its commitment to proactive policing, while at the same time building and maintaining trust with the City’s residents through a commitment to community engagement.

Redden credits Carrollton’s crime reduction within the community to its use of intelligence-led and community policing-models to focus on the core issues of crime as well as the proactive way the CPD protects the community while treating all they encounter with professionalism, dignity, and respect.

“It is truly a partnership between the police and our community that makes us all much safer,” Redden said. “We’re in it together and together, we can make a difference.”

CPD also participates in many community engagement events such as National Night Out held just this past October. Police, along with Mayor Kevin Falconer and members of the City Council visited neighborhoods that had gatherings planned to promote the police-community-building campaign.

“Stepping out of the office and into the neighborhood helps the City reach its citizens in a more personalized way,” Falconer said. “We, like our residents, are interested in what can make Carrollton a better place to live and raise a family.”

“Community engagement is a priority at the CPD, and we are intentional in our efforts to build and maintain good relationships with the people we serve,” Miller said.

Events and programs such as Coffee with a Cop, Citizens Police Academy, and UNIDOS ‒ a Hispanic community outreach program designed to provide assistance to Spanish speakers in Carrollton ‒ are great opportunities for officers to meet with citizens, discuss concerns, and get to know one another better.