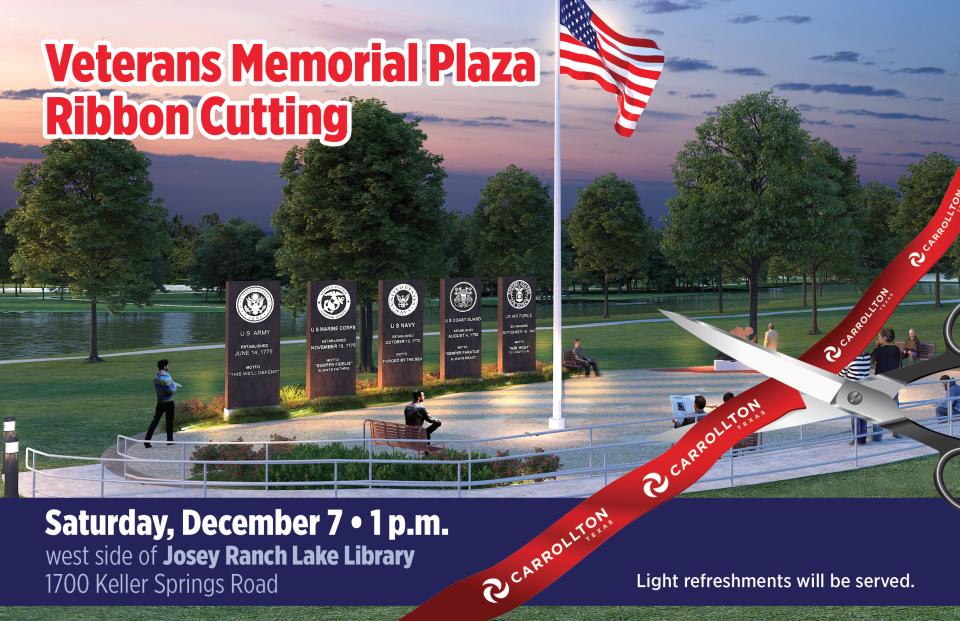 The memorial honors veterans across all branches of the military who have served around the world. The plaza features five illuminated panels showcasing each military branch. The memorial also includes a world map design with stars indicating where different conflicts took place and an American flag over Washington, D.C. Part of the plaza is raised, allowing visitors to view the world map design from an elevated surface.

“The purpose of the Veterans Memorial Plaza is to remember and honor those men and women who served and sacrificed in defense of our great nation while we educate future generations about the courage and valor exhibited by these veterans,” Mayor Kevin Falconer said.

The City partnered with Carrollton VFW Post 8923 for the project. VFW members worked with the Parks Board and City staff to design the memorial and select the location.

“We’re excited to unveil this unique community monument and thankful for the partnership of the VFW in our efforts to recognize veterans through this project,” Parks & Recreation Director Scott Whitaker said. “The plaza will give citizens the opportunity to interact with our nation’s history and honor our City’s veterans for years to come.”

Former Carrollton Mayor Ron Branson, a U.S. Air Force and Vietnam War veteran, said the memorial will pay tribute to veterans who did not stand by in the face of danger, but instead volunteered to place themselves in harm’s way for the good of others.

“These patriots were willing to do whatever was needed to defeat evil and to make our country a safe place to live and raise our families,” Branson said. “All veterans deserve our respect, but none more so than those who have paid the ultimate price in defense of our nation.”

Citizens will be able to purchase bricks from Carrollton VFW Post 8923 to place within a section of the plaza in dedication to their loved ones who have served in the military. The cost for each engraved brick is $30, with an additional $5 charge to add a military emblem or seal from an approved list to the brick. For more information on how to purchase a brick, stop by Carrollton VFW Post 8923/American Legion Post 597 (1024 S. Elm Street) or call 972-242-5650.

In addition to the new Veterans Memorial Plaza, Carrollton also honors veterans through its Veterans Park, which is adjacent to McInnish Sports Complex, as well as a memorial monument near the Carrollton Senior Center (1720 Keller Springs Road).

Following the Veterans Memorial Plaza ribbon-cutting ceremony, which is open to the public, light refreshments will be served in the Carrollton Senior Center.