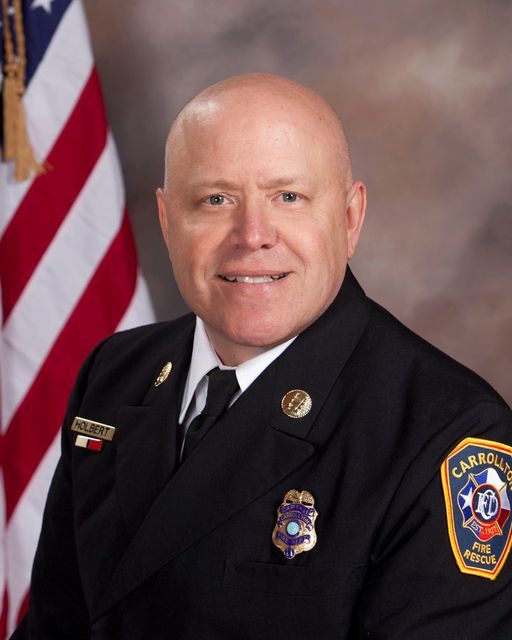 A memorial service for fallen Carrollton Fire Rescue (CFR) Captain Lee Holbert has been set for 11 a.m. Monday, September 21, at Prestonwood Baptist Church (6801 W. Park Boulevard, Plano).  A video of the service can be viewed at https://www.facebook.com/CarrolltonTXFire or https://www.facebook.com/watch/live/?v=381870799875110&ref=watch_permalink.

Holbert died Sunday, September 13 after being hospitalized for a medical emergency suffered while on duty at Fire Station 8 Wednesday, September 9.

A Carrollton native and 1981 graduate of Newman Smith High School, Holbert was 57 years old and served with CFR for close to 31 years. His previous service included ranks of Firefighter, Sub-Apparatus Operator, Apparatus Operator, and his most recent promotion to Captain in 2007. Hired November 3, 1989, Holbert spent his career serving the citizens of Carrollton.

“Carrollton Fire Rescue is devastated by the loss of one of our own. Captain Holbert was a highly decorated 30-year veteran, an exceptional firefighter, a selfless teammate, and a tireless public servant. Please keep his family in your thoughts and prayers during this difficult time as we mourn this loss,” Fire Chief Gregg Salmi said.

From the hospital to the procession through north Dallas – which displayed extensive representation from various local public safety agencies – at least two members of CFR have remained and will stay by Holbert’s side until the conclusion of the remembrance ceremony. Salmi and other members of CFR will speak at the memorial service about Holbert’s time and service to the Carrollton community.

Mayor Kevin Falconer and the Carrollton City Council held a moment of silence in Holbert’s honor at last night’s City Council meeting. The Carrollton flag outside City facilities has been lowered to half staff to commemorate the passing.

It was at one of the last in-person meetings in March 2020, before COVID-19 precautions necessitated wide-spread shutdowns, that Salmi presented Holbert with his 30-year service coin in front of the City Council.

Holbert leaves behind a wife and three children. Anyone wishing to support a charity on behalf of the Holbert family is asked to donate to the Wounded Warrior Project.

For more details on the memorial service, to share a memory, or to show support for the family, click here.

Media logistics have been announced for the remembrance ceremony of Carrollton Fire Rescue Captain Lee Holbert who died on September 13 after experiencing a medical emergency while on duty September 9. Holbert served with CFR for nearly 31 years.

The following protocol has been established to assist news agencies in planning coverage of the event.

The day of the service, set for Monday, September 21, members of the media are welcomed inside A112, a designated media room, at Prestonwood Baptist Church (6801 W. Park Boulevard, Plano) from 10-10:30 a.m. where CFR officials will be available to answer any questions. Media must exit the building before the ceremony begins at 11 a.m.

To honor the family’s privacy, NO MEDIA WILL BE PERMITTED INSIDE THE FUNERAL.

During the service, City PIOs will be on hand to accommodate the media as best as possible and can be reached at 972-466-4816 or by email at marketing.services@cityofcarrollton.com. CFR PIOs will not be available during the service.

Media is welcome outside the church prior to and during the service. There will be a designated media parking lot near the Chapel entrance to the church. The location will be through the main entrance, off Park Boulevard. There will be signs for the Chapel. There will also be a designated spot for live trucks. Obtaining b-roll footage or photos of any available exteriors will be permitted throughout the morning. Fire apparatus from various public safety agencies will be onsite.

During the live streamed service, viewers will be able to hear a ceremonial final alarm – a bell signifying that a firefighter is “back in the house” or has returned home – remarks from Carrollton Fire Chief Gregg Salmi and Mayor Kevin Falconer, a presentation by the CFR Pipe and Drum Corps, as well as see the CFR Honor Guard present colors.