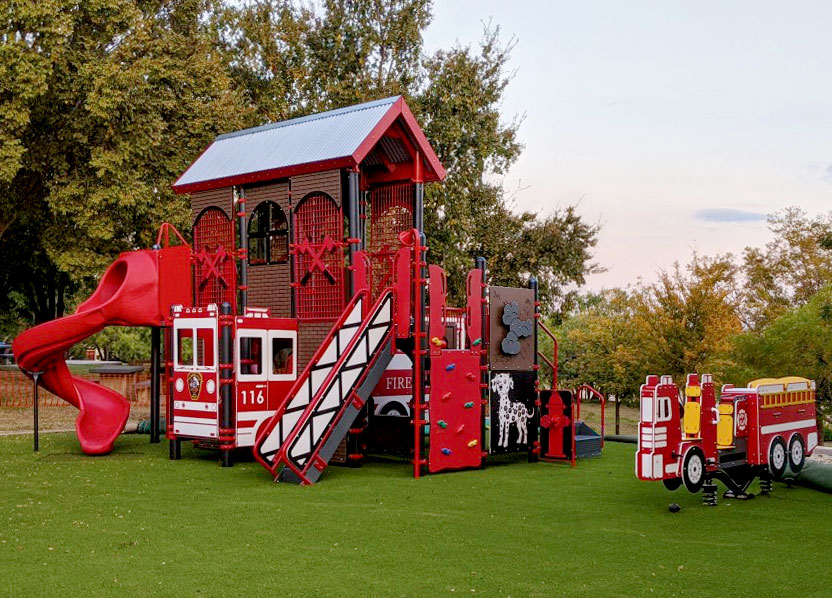 City Council approved funding in February for renovations, including a synthetic turf surface as well as new playground equipment with a firefighter theme, honoring Carrollton’s first responders and the namesake of the park, former Carrollton Fire Chief and Fire Marshal Harold K. Bessire.

“Chief Bessire was in command during a time of growth for the City,” Carrollton Fire Chief Gregg Salmi said. “The department went from one station to six under his leadership, and the City became the first suburb to train and staff paramedics on ambulances offering advanced levels of patient care. His command presence and professionalism elicited feelings of confidence, support, and great respect from those who served under him. I am proud to have served with him.”

Bessire started working for Carrollton Fire Rescue (CFR) in 1961 as one of only three paid firefighters at the time. He rose through the ranks to become Fire Chief in 1978, pioneering progressive fire prevention programs, advanced firefighting methods, and emergency medical services before retiring in 1992. Harold K. Bessire Park officially opened in May 1998.

“Carrollton is excited to celebrate its first responders while adding value to Bessire Park for community members to enjoy for years to come,” Parks & Recreation Director Scott Whitaker said. “The City strives to be the community that families and businesses want to call home, and providing high-quality parks and leisure services for citizens is an important part of that vision.”

The new playground equipment includes a small firehouse for ages 2-5 and a larger structure that resembles a fire station for ages 5-12. There is also a large fire truck play element as well as two swing bays. Some elements of the new equipment incorporate the CFR shield and engine-specific colors.

Park renovations were completed earlier this month. In addition to its playground, Bessire Park offers various other amenities such as walking paths, a basketball court, picnic tables, grills, and a pavilion.