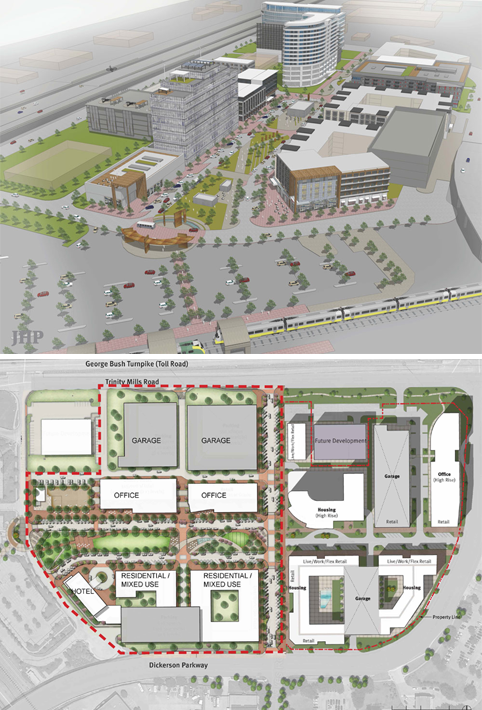 Architecture plans for the green park esplanade at the center of the City of Carrollton’s premier project, the forthcoming Trinity Mills Station urban development, were presented to City Council at the Tuesday, December 15 meeting.

The schematic designs reveal the landscape vision for the open-air park which will serve as the social center to the new development, a lawn for casual enjoyment, and a special event area for concerts and public markets. The new esplanade design will offer a walkable community area, seamlessly connecting shopping, dining, entertainment, living, and working.

“The esplanade is the second monumental milestone of the project,” Carrollton Urban Development Director Ravi Shah said. “The first milestone was the approval in April for a 125,000-square foot, six-story class A office structure to serve as the marquee building within the new development.”

Shah said the esplanade will continue Council’s vision to transform Carrollton from an inner-ring suburb into a vibrant hub for economic and social activity, with increased shopping and dining, hospitality and recreation venues, and business opportunities.

The esplanade’s streetscape and architecture runs the length of the nearly 26-acre property and comprises the large area between the class A office buildings to the north side of the development and the retail offerings and luxury apartment homes to the south. A one-way couplet will enable traffic access on the perimeter of the esplanade from west-to-east down the residential side of the complex and east-to-west along the office buildings to the north. Traffic on Blanton Drive and Mayes Road will be two-way, to complete the flow on either end. Additional options include an open-air pavilion/marketplace or an enclosed retail building to the west of the development, a retail kiosk to the east, a restaurant, and a dog park.

The result will be an engaging space that will ultimately create a new, vibrant Carrollton neighborhood, according to the architect from Kimley-Horn: Planning and Design Engineering Consultants who made the presentation. Kimley-Horn has a culture of collaboration and a commitment to providing an environment for people to flourish and a sense of place, encouraging repeat visitors for years to come.

“I am very excited about this partnership and the vision set in place by the City, DART, Integral, and Koa Partners,” Carrollton Mayor Kevin Falconer said. “I believe the City is in for an economic boost that will reclaim the area surrounding the old Home Depot property and infuse the neighborhood with a modern, streamlined aesthetic.”

According to Falconer, the Trinity Mills Station project will be one of the most impactful developments in Carrollton in recent history. The project was a Council priority from the Strategic Planning session in the summer of 2017 and, arguably, one of the most thrilling projects to come into fruition. The design brings the best amenities of Klyde Warren Park in Dallas and those of similar promenades and streetscapes across the United States and will create a series of unique spaces and experiences to be enjoyed by residents, business owners, and visitors alike, Falconer said.

Integral, an Atlanta-based master developer led by Integral Principal for the project, Art Lomenick, has partnered with Koa Partners, a Dallas-based office developer led by CEO, Harry Lake, to achieve the vision of redeveloping the new Trinity Mills Station into a place to live, work, and play by transforming former parking lots and other commercial and acquired land by the City into an urban village that will spur further investment around the Trinity Mills DART station and the Broadway corridor to Downtown Carrollton.

“Art has directed the initial redevelopment of numerous uptown and midtown communities throughout the U.S.,” Integral CEO Egbert Perry said. “He is excellent at transforming developments into thriving urban districts of shops, residencies, offices, and engaging spaces, and I am thrilled with his leadership and the progress being made.”

Landscaped gathering places amid grassy berms and integrated seating will provide room for concerts, picnics, exercising, and other events, creating an opportunity for activity day and night every day of the year, according to Lomenick.

“The plan for Trinity Mills Station is to bring in people that are passionate about the project and turn an area like this into a prime spot for corporate relocations and civic growth,” Lomenick said. “The key to sparking successful catalytic developments like this is partnership and vision building. The esplanade’s modular space, as a convergence of commerce, culture, and community gathering, provides connectivity and integration.”

Due to its location at President George Bush Turnpike (PGBT) and Interstate Highway 35E (IH-35E), this premier redevelopment area has high visibility and the potential to capture not only the east-west traffic from PGBT, but also north-south commuters from IH-35E. Highway and rail connections to Dallas Love Field and DFW International Airports can be made within 20 minutes.

Strategically located adjacent the Trinity Mills Dart Station and PGBT, the City and DART have expressed their vision for the site as an active mixed-use Transit Oriented Development (TOD). 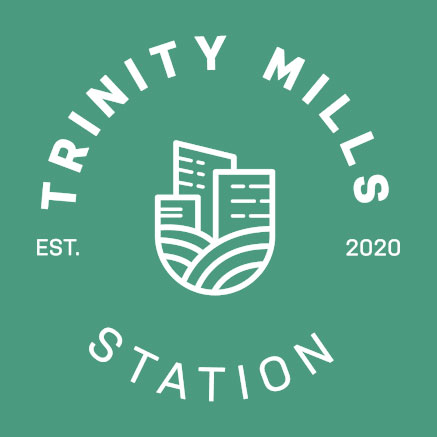 “Connectivity and multi-modal access are increasingly important in a Texas that is rapidly urbanizing – this is especially true in the Dallas/Ft. Worth region,” DART President/Executive Director Gary C. Thomas said. “The long-term benefits of developing communities and activity centers near rail stations is one that extends across the nation. The City of Carrollton’s commitment to multi-modal transportation options, and an urban landscape that reflects the importance of those options, will be fully realized with Trinity Mills Station.”

“Carrollton’s transportation infrastructure is one of its greatest strengths,” Falconer said. “Trinity Mills Station will be a tremendous catalyst for growth for all three of Carrollton’s DART light rail stations, as we continue to create a City that more families and businesses want to call home.”

Construction is also in the planning stages to extend Carrollton’s Furneaux Creek Blue Trail, from Hebron Parkway to Trinity Mills Station and on to Downtown Carrollton, providing additional paved trails and sidewalks for walkers, joggers, and cyclists, and an alternative means of transportation within the City.