The City of Carrollton will host a fireworks show over Josey Ranch Lake (1700 Keller Springs Road) on Sunday, July 4 after sunset at approximately 9:30 p.m.

The 15-minute display for the surrounding community has received a great response the last few years – even as it was rescheduled for Veterans Day in 2020. But the show returns to celebrate Independence Day this year and is sure to entertain yet again. Should the ever-changing Texas weather present a problem, a rainout date of Monday, July 5 at 9:30 p.m. has been scheduled. 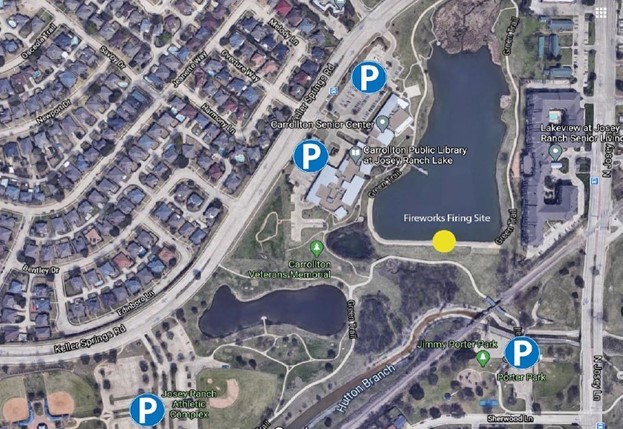 Residents are encouraged to view the fireworks show from surrounding neighborhoods or from one of the available parking areas. There will be no on-site event.

Carrollton Fire Rescue reminds citizens that it is illegal to possess, manufacture, store, sell, handle, or discharge fireworks within Carrollton City limits. While all fireworks are illegal, Class C consumer fireworks include most over-the-counter items such as bottle rockets, roman candles, sparklers, spinners, and sparkle fountains.

According to the latest Fireworks Annual Report released by the U.S. Consumer Product Safety Commission, U.S. hospital emergency rooms treated an estimated 10,000 people for injuries related to fireworks in 2019, 73 percent of which occurred between June 21 and July 21. Children younger than 15 accounted for 36 percent of those injured. Each year, fireworks also cause an average of 19,500 fires and $105 million in direct property damage, according to the National Fire Protection Agency.

For more information about the fireworks display and available parking areas, visit cityofcarrollton.com/fireworks or call 972-466-3593.