Carrollton Fire Rescue (CFR) received a grant in the amount of $66,000 from the Metrocrest Hospital Authority for new portable Automated External Defibrillator (AED) machines to be implemented in all Carrollton Public Works vehicles and at three City parks. The check was presented in an informal ceremony on Monday, June 7 at CFR’s Fire Administration Building.

“To my knowledge, Carrollton will be the only City in the country to implement AEDs in all police vehicles, City facilities, and now in all Public Works vehicles,” Carrollton Fire Chief Gregg Salmi said. “CFR currently has 88 AED units deployed throughout the City. The grant will add another 52 for Public Works vehicles and three for the Carrollton Parks & Recreation Department.” 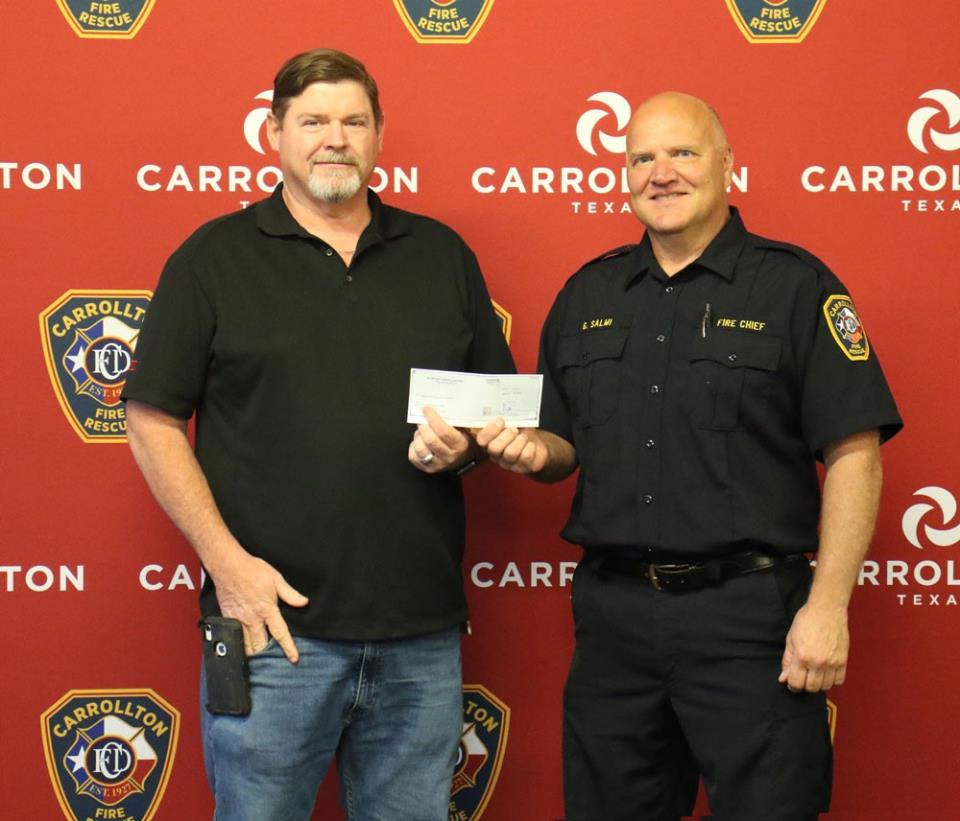 The hard-working men and women in the Carrollton Public Works Department are spread throughout the community on a daily basis performing construction, maintenance, and repairs on water utilities, streets, drainage, and traffic systems, Salmi said. It made sense for CFR to partner with Public Works to leverage these employees to respond to nearby cardiac arrest incidents and help address the critical time between when a person succumbs to cardiac arrest and paramedics’ arrival.

“We’re continually looking for new ways to improve the care we provide to the citizens of Carrollton and surrounding communities and are thankful for the generosity of the Metrocrest Hospital Authority in supporting our mission to protect life through the implementation of these portable AED devices,” Salmi said. “Every second is crucial during a cardiac event, so a community-based response is vital in giving the patient the best chances of survival.”

According to the American Heart Association, sudden cardiac arrest is often a survivable event, but usually only with bystander intervention prior to Emergency Medical Services (EMS) arrival. CPR, especially if administered immediately after cardiac arrest, can double or triple a person’s chance of survival.

Consequently, the City of Carrollton in partnership with the North Texas Emergency Communications Center (NTECC) launched PulsePoint Respond in December of 2019, a free mobile app empowering citizens trained in CPR to help contribute to the safety and well-being of their fellow community members.

CFR will train Public Works employees and Parks & Recreation staff to operate an AED as well as how to use the PulsePoint app. Employees will be alerted through the app if they are within a quarter of a mile of the signal and in a position to provide potentially lifesaving assistance to nearby victims of sudden cardiac arrest.

The alert happens at the same time crews are dispatched by NTECC. PulsePoint directs these potential rescuers to the exact location of the incident. The goal of the program is to fill the critical gap between the time NTECC is notified and when the medics arrive.

AHA statistics indicate approximately 356,000 people of all ages experience out-of-hospital cardiac arrests each year and nine out of 10 victims die, making sudden cardiac arrest the third-leading cause of death in the United States. When bystanders intervene immediately, delivery of CPR can sustain life until paramedics arrive by maintaining vital blood flow to the heart and brain and survival rates can double or triple.

CFR has a history of partnership and support with MHA. In April 2017, CFR received a grant for LUCAS chest compression devices, which administer 102 chest compressions per minute during cardiopulmonary resuscitation, as well as new portable sonogram machines in April of 2019 which are implemented in all of Carrollton’s ambulances. Ultrasounds in the field provide earlier detection of time-critical conditions, a process that has the potential to yield lifesaving results.