Put Your Ideas into Action on a Carrollton Board or Commission 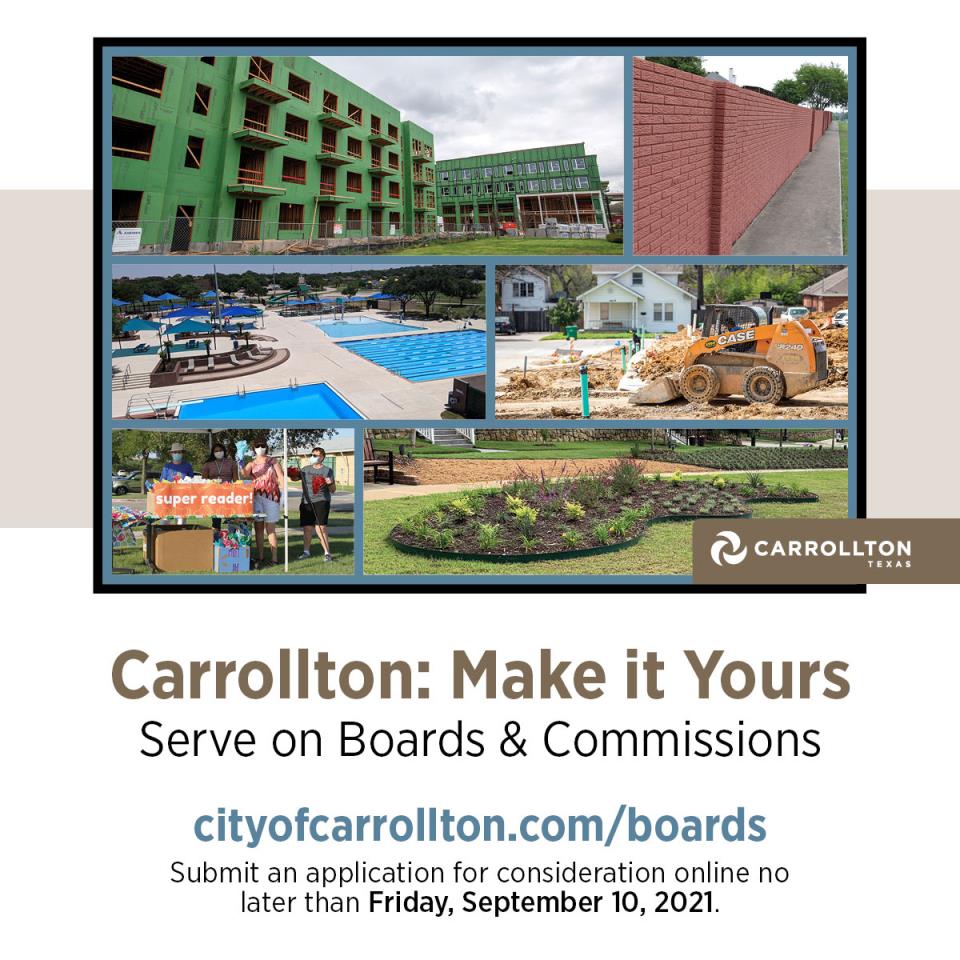 The City of Carrollton is now accepting applications for the 2021 Boards & Commissions appointments in October. Residents are encouraged to get involved in the areas of community life that mean the most to them.

City government depends on residents who volunteer their time and expertise as members of boards, commissions, and committees. By lending a more diverse viewpoint for City Council to consider, their actions help shape and influence public policy. Citizen involvement is vital in setting the direction for Carrollton's future.

Applications for all seats will be accepted until Friday, September 10.

The following is a list of Carrollton’s boards and commissions:

Museum & Historic Advisory Committee (MHAC) advises and makes recommendations to the City Council regarding the A.W. Perry Homestead Museum and other landmarks to include history, art, architecture, and other areas of culturally significant resources for future generations.

Parks & Recreation Board serves in an advisory capacity concerning the acquisition, maintenance, operation, and use of parks, playgrounds, and open spaces within the City.

Planning & Zoning Commission (P&Z) has the authority for approval of subdivision plats and provides recommendations to the City Council regarding applications for amendments to the zoning ordinance, zoning map, and the Comprehensive Land Use Plan, in accordance with state law.

Property Standards Board (PSB) hears cases on dilapidated or neglected properties and issues orders for repair or demolition of substandard structures. Board members hear and make decisions regarding appeals of orders, decisions, or determinations made by the City’s Building Official and Fire Marshal relative to the application and interpretation of building, electrical, plumbing, mechanical, fire, and housing codes, as well as sign, visibility, and driveway ordinances. The board also hears requests for variances, special exceptions, or meritorious exceptions to Carrollton’s Comprehensive Zoning Ordinance and Sign Regulations, in addition to hearing appeals to the City’s Hotel/Motel Ordinance and Apartment Crime Reduction Program.

Traffic Advisory Committee (TAC) receives and considers information on traffic enhancement and makes written recommendations to encourage and promote traffic safety within the City. Committee members coordinate planning and implementation of projects by various organizations interested in traffic safety. The committee serves as an advisory board to the community, but does not have responsibility or authority over the public officials or employees of the City in the implementation of traffic safety, enhancement programs, or operations.

The Carrollton Home Rule Charter establishes certain qualifications that must be met by all members of City boards, commissions, and committees. To serve, you must have been a resident of Texas for at least one year with at least six of those months as a Carrollton resident; be a qualified Carrollton voter at the time of appointment; not have been convicted of a crime of moral turpitude; not be an adversary party to pending litigation against the City, except for eminent domain proceedings; and have a creditable record of attendance and performance in any previous board service.

Carrollton City Council will discuss the appointments in an October worksession prior to a Council meeting. Some boards and commissions will require interviews for potential candidates. All applicants will be notified after the appointment process.

For more information or to fill out an application, visit cityofcarrollton.com/boards or call 972-466-3005.