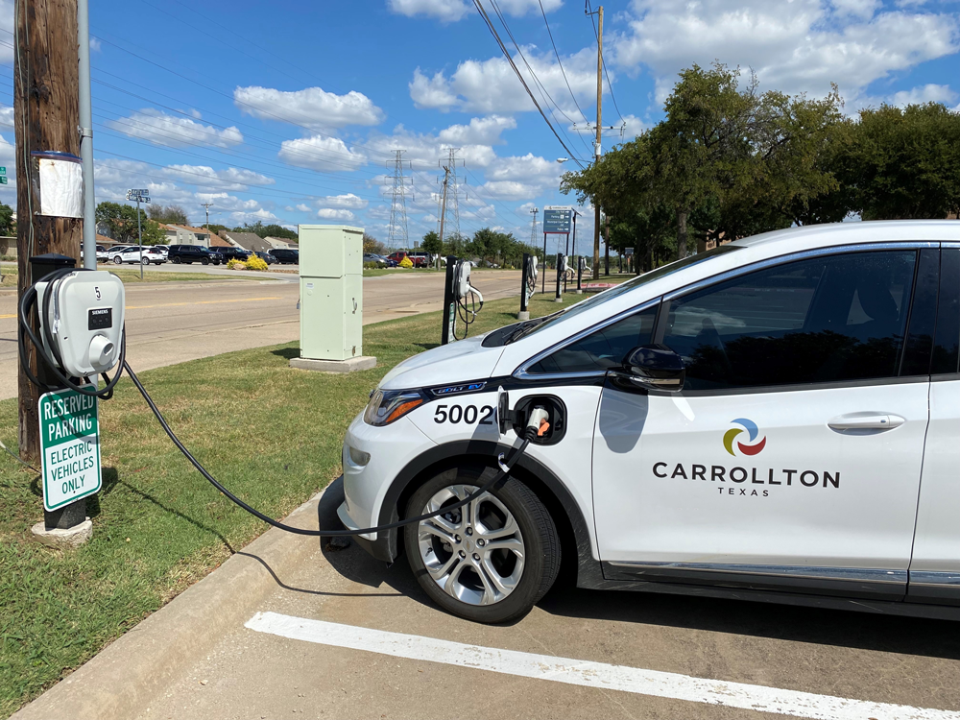 The City of Carrollton was named a 2021 Gold Fleet award winner for the second year in a row and was one of 9 cities named for the award by the Dallas-Fort Worth Clean Cities (DFWCC) Coalition for its contributions and efforts in going the extra mile to reduce petroleum consumption and improve the air citizens breathe.

DFW Clean Cities is a U.S. Department of Energy (DOE) program that strives to minimize petroleum consumption in the transportation sector which typically also helps and subsequently, improves air quality. Winners were instrumental in helping the region reduce 23.9 million gallons of gasoline equivalent, 734,089 pounds of ozone-forming nitrogen oxides (NOx), and 125,058 tons of greenhouse gas emissions in 2020.

“The City strives to continually improve emissions controls for our citizens and local employers,” Carrollton Fleet and Facilities Director Dwayne Bianco said. “Through our partnership with Vector Fleet Management, the City of Carrollton maintains its position as one of DFW’s leaders in the conservation of energy and the prevention of pollution.”

The City of Carrollton outsourced its fleet operation in 2010 as part of a managed competition philosophy. The premise of managed competition is that the procurement of services through competitive proposals – rather than the traditional approach of granting an in-house operation a monopoly – drives improvements in service levels, quality, and operating costs.

The Gold Fleet award recognizes significant progress in the long-term implementation of the City of Carrollton’s environmental policy. The achievement demonstrates the City’s commitment to responsible and strategic use of resources through education, prevention, conservation, and reduction.

Participating fleets are required to provide details on their move toward cleaner operations, including using alternative fuel vehicles, reducing idling, or using technology to improve the efficiency of operations. Members of the DFWCC and the North Central Texas Council of Governments (NCTCOG) score the submitted reports and categorize them into levels – Gold, Silver, and Bronze. Gold Level status requires 45-100 points; Silver Level status requires 34-44 points; and Bronze Level status requires 28-34 points. The DFWCC then presents the collected data in an annual report that is shared with the DOE to document progress.

Clean Cities also highlighted significant improvements in areas such as the reduction of NOx, transition to alternative fuels and gasoline gallon equivalent savings through the Shining Stars Awards. The cities of Carrollton, Coppell, and Dallas, as well as DART, and SPAN Transit were recognized for their NOx reduction. The Shining Stars showing the greatest progress transitioning to alternative fuels were the cities of Carrollton and Plano, as well as Denton ISD and Prosper ISD.

DFW Clean Cities also introduced the Fleet Challenge this year, recognizing entities that met or exceeded goals they set in their 2019 survey. The cities of Carrollton, Bedford, and Frisco, as well as DFW Airport received this inaugural recognition. Carrollton’s challenge was to obtain a 10 percent increase in alternative fuel economy and the City was able to achieve a 21 percent increase in alternative fuel vehicles (AFVs), self-propelled vehicles that use renewable and zero-emission energy.

For more information on the City of Carrollton, visit cityofcarrollton.com.