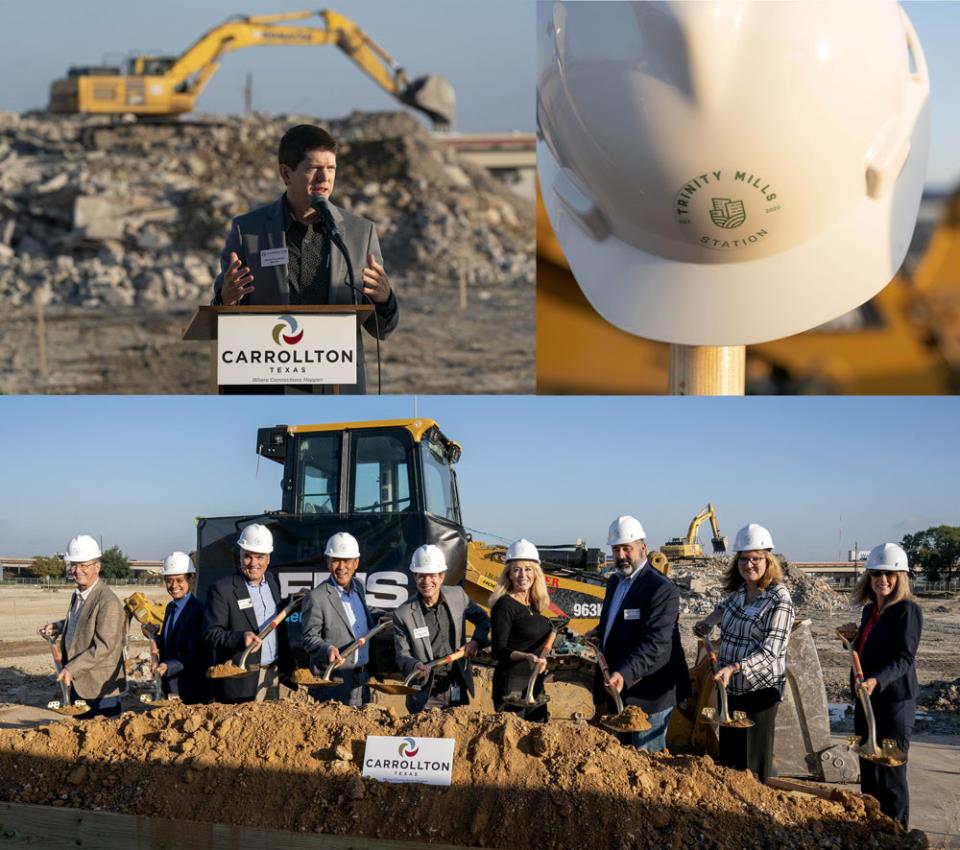 The City of Carrollton Mayor and Council officiated a groundbreaking ceremony on Wednesday, October 20 at the site of the upcoming urban development at Trinity Mills Station.

“The Trinity Mills development has been a very long time coming,” Carrollton Mayor Kevin Falconer said. “This is a major development that started more than 20 years ago when the City reclaimed the area surrounding the old Home Depot property.”

Falconer said he is honored to have been involved with the City of Carrollton for a long time and on different City Councils. As a result, he has seen the entire Trinity Mills Station urban development come to fruition.

“I am extremely confident in the development’s success,” Falconer said. “The quality partnerships forged here are what ensure that success and continue to make Carrollton the community that families and businesses want to call home.”

The City of Carrollton, Dallas Area Rapid Transit (DART), The Integral Group, and Koa Partners signed the Master Development Agreement (MDA) in March 2020 for the entire Trinity Mills Station urban development. Council approved the first of two major office buildings for the area in April 2020, and was presented plans for the esplanade in December 2020.

Also on hand for the ceremony were representatives from Joeris General Contractors, Kimley-Horn planning and design consultants, JHP Architects, CRTKL Architects, and JLL Incorporated as well as current and former Carrollton City Councilmembers.

Phase I infrastructure, which was approved for construction in August 2021, will include a 125,000-square foot, six-story class A office building, a five-story mixed-use residential building, and a beautiful esplanade. This walkable community area will connect shopping, dining, entertainment, living, and working.

The City and DART have expressed their vision for the project as an active mixed-use development including office buildings, a hotel, restaurants, retail, residential uses and large outdoor grass gathering places for concerts, picnics, exercising, and other events that would create activity day and night every day of the year.