The City of Carrollton’s 11th annual Festival at the Switchyard proved once again to be a great success with more than 32,000 guests enjoying free concerts, free children’s activities, free rides and games, quality food and craft vendors, and great beer and wine all day long.

The family-friendly event safely brought the crowds out to enjoy corny dogs and turkey legs and watch the kids play on the bungee trampolines. Festivalgoers also enjoyed performances from artists including JPGR: A Beatles Tribute, Chicago Tribute Authority, Canta Rhythm and Brass, Shameless, and Even It Up.

Austin-based Tomar and the FCs brought their upbeat soul sounds to entertain audiences before alternative rock band Dishwalla performed their mega-hit song “Counting Blue Cars” alongside other favorites like “Collide” which was featured on the WB’s Smallville.

Closing the evening, nationally-known rock band Blue October lit up the night as they finished out the show with unforgettable hits like “Hate Me,” “I Hope You’re Happy,” and “Into the Ocean.” 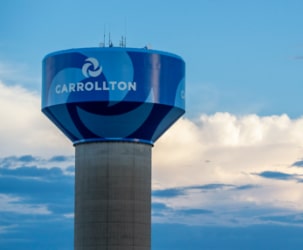 For the fifth year, Festival fans also had the opportunity to win a custom-wrapped guitar signed by the headlining bands. Music lover Colleen Martindale won the first of two guitars through the City’s social media contest and brought home a brand new six-string.

Festivalgoers have another chance to win the second signed, custom-wrapped souvenir guitar by completing an attendee survey by Monday, November 15 at 11:59 p.m. Click on Festival Survey at carrolltonfestival.com or find it on the Festival Facebook to provide vital input for future Festival fun.

The Festival at the Switchyard is a successful signature event in large part thanks to the many volunteers, community partners, and attendees.

“The City of Carrollton would like to thank our community and visitors for coming out, showing their support, and having a fun and safe time while enjoying the many free activities at the event,” Carrollton Marketing Director Kelli Lewis said. “The Festival at the Switchyard offers something for everyone from music lovers to food enthusiasts, and we hope the event gave attendees a chance to visit Carrollton’s charming Historic Downtown Square and learn about all of the wonderful shops and restaurants in the area.”