Beginning in 1900, local merchants started forming what is now the Downtown Carrollton Square. When Carrollton incorporated in 1913, the Square was the center of a thriving community with rail access in every direction. The first gazebo was built in 1921 and soon became a place for concerts, speeches, and Saturday dances - providing entertainment and a community focal point for people in Carrollton.

In addition to the local merchants and restaurateurs, the City of Carrollton took an active role in revitalizing Downtown Carrollton. Over the past decade, the City has been steadily making improvements to Downtown Carrollton including: reconstruction of South Main Street and Pioneer Park in 2010; construction of additional parking lots and parking garage; execution of the City's first Public Private Partnership called the Union at Carrollton Square - a mixed-use development featuring 179 for-lease apartments and the Twisted Root Burger Company which opened in 2012; and our latest project - the rehabilitation of the Square, completed in 2015.

The Downtown Carrollton Square rehabilitation project gave the Square back to the public by rearranging the parking to the Square's outside edges. By moving the parking, aesthetic and practical improvements have been and can continue to be made, including: addition of ample public seating, WiFi, lighting, and a lawn area. Concurrent to the Square project, the City also revamped Pioneer Park. The newly revamped Downtown Carrollton Square was named a Best Public Improvement project finalist of the 2015 Texas Downtown Association (TDA) President’s Awards Program, which recognizes excellence in public projects and planning in downtown or commercial districts. The Downtown Carrollton Square offers an abundance of entertainment opportunities, unique shops, and eclectic restaurants. The Square remains an active retail and dining area. Click here for more information on what's going on Downtown Carrollton.

Click here for more information on Downtown's annual festival - Festival at the Switchyard.

Access to Downtown Carrollton will be improved by the 35Express Project. The Texas Department of Transportation (TxDOT) is currently reconstructing the IH-35E/Belt Line Road interchange (pictured below). The new interchange will eliminate most of the freight rail street crossings. For more on the project, please visit the project website. You can also visit the Project's Information Office (Monday - Friday 8 a.m. to 5 p.m.) at 2420 South Stemmons, Suite A, Lewisville. 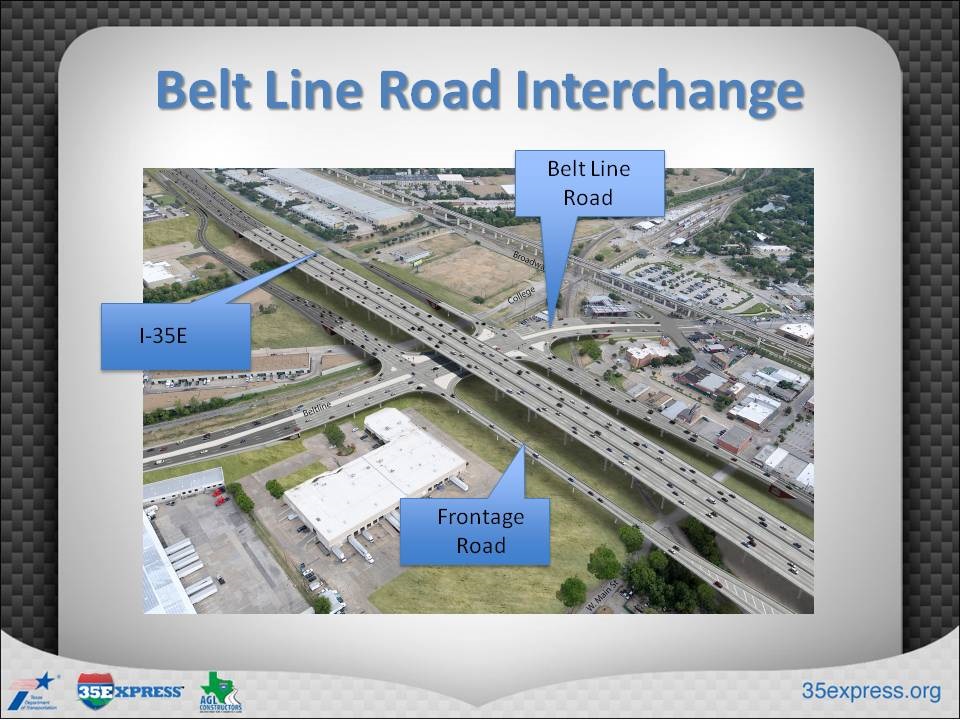