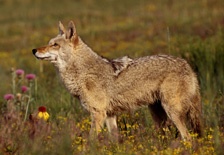 The coyote is a carnivorous mammal belonging to the dog family. Coyotes are smaller than gray wolves, but overlap in size with the red wolf and the domestic dog. The nose pad is narrower and the ears are longer than those of the wolf. Adult males range in weight from 18 lbs to 44 lbs. and females from 15 lbs. to 40 lbs. Color varies, but coyotes are usually tan.

Coyotes communicate by howling. The coyote is an intelligent, adaptable animal that is capable of running at speeds of up to 40 miles per hour when chasing prey. Coyotes have long and slender legs, their bodies are muscular, with deep chests. Their claws are strong, blunt, and non retractile. Their usually elongated skull is considered an adaptation for seizing or biting prey on the run. Coyotes typically have five toes on each forefoot and four toes on each hind foot. The fifth, or thumb, is a vestigial. Coyotes have 42 teeth; included among the teeth are long, powerful canines and other teeth adapted for meat cutting, as well as broad-crowned molars suitable for chewing plants. Females breed during January and March and produce an average of 6 pups.

The larger species of coyotes often travel in packs, in which individuals follow and obey a dominant member. They have a keen sense of smell for use in hunting. Originally coyotes inhabited open country and grasslands. Their diet is extremely diverse and they take advantage of whatever is available, including domestic animals, rodents, rabbits, birds, insects, and fruit.