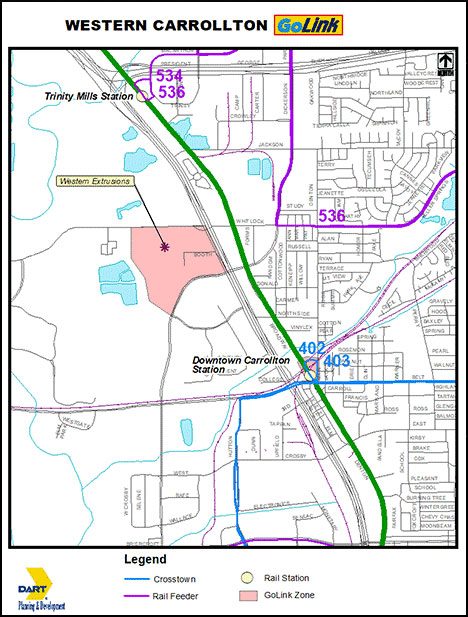 The City of Carrollton will serve as the latest location for GoLink, a service of Dallas Area Rapid Transit (DART), through a partnership with local business Western Extrusions helping employees arrive safely to work from the transit station.

The expanded service, set to begin in May, came in response to a project called the “Last Mile” initiated by the City and Western Extrusions, a private sector major employer in the Valwood Industrial Park area of Carrollton. Western Extrusions saw a challenge in getting employees who ride the DART train each day the last mile from the DART station to the manufacturing plant on Sandy Lake Road. The effort will be funded through a two-year agreement between DART and the North Central Texas Council of Governments (NCTCOG).

“We are proud to announce the partnership between the City of Carrollton, DART, NCTCOG, and Western Extrusions to implement this new service in Carrollton that allows us to take care of this last mile of our transit system,” Mayor Kevin Falconer said.

The City supported the concept because it serves as a business retention initiative to help Western Extrusions keep and expand its employment base, which is approximately 850 jobs. Together, the City and Western Extrusions approached DART in 2019 regarding a lack of last-mile transit connections from the Downtown Carrollton light rail station to the manufacturing business development.

The solution was an on-demand, personalized, curb-to-curb GoLink service with NCTCOG funding $325,000 for two years and DART monitoring performance, holding a public hearing, and evaluating a long-term service approach for the entire Valwood Industrial Park area, which is the third largest industrial park in the Metroplex ranked by completed square footage. Valwood is located in the northwest quadrant of I-635 and I-35E and encompasses more than 2,200 acres. It has over 26 million completed square footage with 500 buildings and 1,500 tenants.

The GoLink service will run Monday through Friday from 5:30 a.m. to 7 p.m. with a dedicated on-demand vehicle and a connection directly to Downtown Carrollton Station served by DART’s Green Line light rail.

The expansion is part of the “Last Mile” program initiated by the City through an Economic Development Incentive Agreement. The land will also be the location for a transit shelter to be constructed by Western Extrusions. The shelter will provide covered space for employees and allow data to be collected from scanned badges for the ride share program supported by NCTCOG. The company will purchase DART transit passes for every employee using public transportation for work transportation.

Kenneth Schappert, Director of Human Resources for Western Extrusions, said, “Western Extrusions is extremely grateful for the support of our partners, including the City of Carrollton, NCTCOG, and DART, supporting our efforts to create a transportation solution for our employees. This solution will be a competitive advantage for our organization and the City by providing reliable, safe, and cost-effective transportation for employees traveling in DFW to Carrollton to work with Western Extrusions. We hope this model becomes the norm for other organizations around the Metroplex.”

Western Extrusions is a privately held company that has been in Carrollton since 1979. It is an industry leader in the extrusion, fabrication, and finishing of aluminum. The company manufactures products for clients nationally and internationally and is expanding operations by bringing its recycling in-house, adding a new 43,000 square-foot aluminum recycling facility at the Sandy Lake Road location that will include office, manufacturing, and warehouse uses.