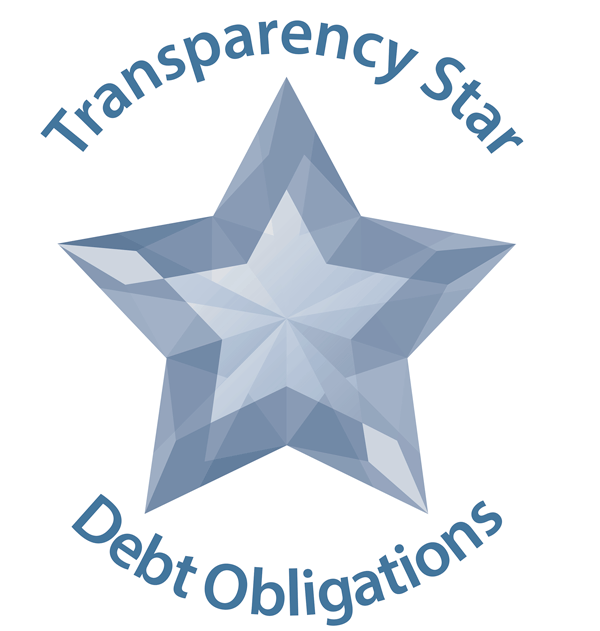 City of Carrollton (City) outstanding debt is comprised of direct obligations and contractually obligated debt from other entities. Direct obligations consist of debt issued by the City and secured by levied taxes or City revenues. Contractually Obligated Debt is debt issued by other Entities that the City is obligated to pay and calculated in accordance to contractual provisions.

General Obligation Bonds have been rated AAA by Standard & Poor’s and Fitch.

The Revenue Bonds are collateralized by the revenue of the water and sewer system and the various special funds established by the bond ordinances.  The ordinances provide that the revenue of the system is to be used first to pay operating and maintenance expenses of the system and second to establish and maintain the revenue bond funds.  Remaining revenues may then be used for any lawful purpose.  The ordinances also contain provisions which, among other items, restrict the issuance of additional revenue bonds unless the special funds noted above contain the required amounts and certain financial ratios are met.  Management of the City believes that it is in compliance with all significant financial requirements as of September 30, 2020.

Water and Sewer Revenue Bonds have been rated AAA by Standard & Poor’s and Fitch.

Dallas Water Utilities (DWU) Contractually Obligated Debt
Carrollton has a “take or pay” contract to purchase potable water on wholesale basis. Overlapping debt is calculated based on Carrollton’s Rate of Flow setting as a percent of all wholesale customers applied to total outstanding DWU debt multiplied by the percentage of the DWU system applicable to wholesale customer activities. Debt numbers are taken from the DWU Wholesale Rate Study.

As of September 30, 2020 the Direct and Contractually Obligated Debt for the City was as follows: 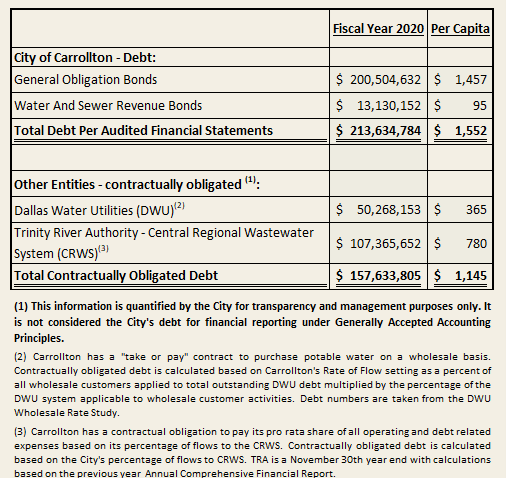 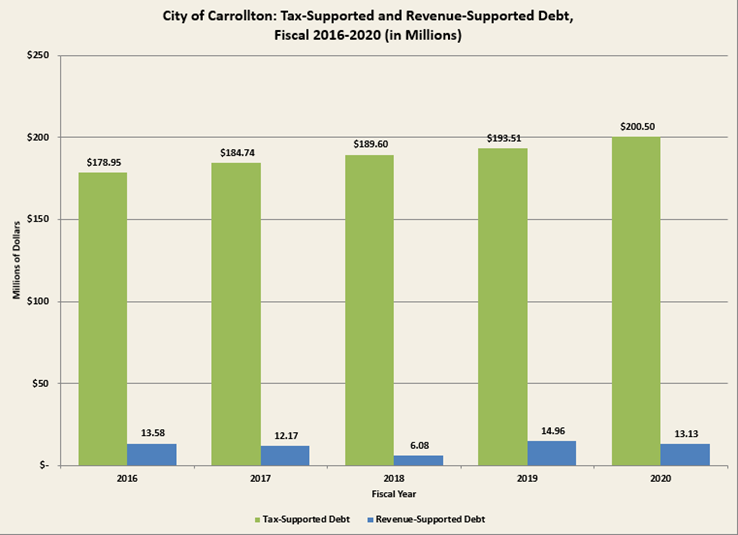 Outstanding Debt Obligation by Issue as of 09/30/20: Issue-by-issue listing including principal amount of each outstanding debt obligation.

Texas Comptroller of Public Accounts Debt at a Glance Tool

Debt Service as of 09/30/20: Debt service schedules for all outstanding General Obligation Bonds and Revenue Bonds.

For more information on the most current General Obligation and Revenue Bonds, visit the Official Statements web page.

For information on the last bond election view the Voters' Guide.