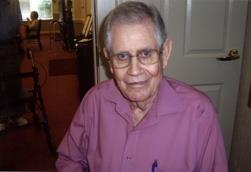 Service History, Stateside or Abroad: Graduating from high school at age 16, I started with a job as a soda jerk at $9 a week, then took a job with the Texas Highway Department at $21 per week. Then came a wartime job in the shipyards in California. That meant $49 a week as an electrician’s helper working on a Liberty ship. Not long afterward, I received a “Greetings” letter from the Draft Board in Texas. It was signed by President Roosevelt, “inviting” me to join the fighting men and women. I was drafted, in other words, in 1943.

We took basic training at the Marine base, San Diego, CA. Afterward, we spent numerous weeks at a high speed radio school there. A few of us had qualified for transfer to the top secret Japanese code school at Bremerton, WA. Since the US had broken the enemy code some time earlier, the Marines and Navy seemed to have trained a sufficient number of qualified operators and thus no longer needed our skills. So the lot of us, numbering about 15, were sent by train to the big marine base at Camp LeJuene, NC.

Thereafter, I was transferred to the island of Saipan in the Marianas Islands some 1500 miles from the Japanese homeland (Okinawa). I was assigned to the Second Marine Division. When the US went after the Japanese (we had other less flattering names for them) it had already joined England and France in an all-out war against Germany. Finally, the Soviet union joined the Allies and fought the Germans on the Eastern front. The Russians helped shorten the European war until Germany surrendered on May 7, 1945. That freed up the Allies to focus their efforts on Japan, and as it happened the Japanese formally capitulated four months later.

The Marines were, and still are, a proud fighting machine and until the war came along they were manned by volunteers who signed up for four-year hitches. In my instance, I was considered a “reserve” who was drafted not for four years but “for the duration of the national emergency.” I was discharged from the marine base in San Diego, CA in 1946 and returned to Haskell, TX.