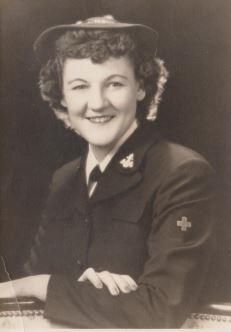 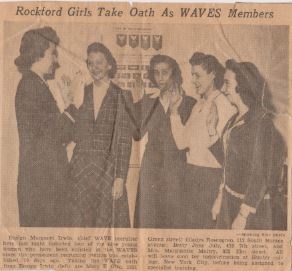 Betty Krause story as told by her and written by Jeffrey Meek.

During World II, women went to work like never before. Over two million worked in defense plants. Among other things, they were welders, riveters and crane operators. One thousand women earned their pilots wings as part of the WASPS, or Women Air Force Service Pilots. Thirty-eight of them died in the line of duty ferrying planes and towing targets throughout the United States.
Others joined the US Navy WAVES, or Women Accepted for Volunteer Emergency Service. Betty Krause did both. Before her entry into the service she worked in a factory as a drill press operator. Later, she decided to join the Navy. Krause was living in Rockford, Illinois when word came of the Japanese attack at Pearl Harbor. “I knew we would be at war. My brothers would have to go into the service,” she remembers. She said life in Rockford got boring. Most of the boys in town were gone, rationing had begun and there wasn't much to do. It was 1944 when she and a friend noticed the pictures and recruiting going on and decided to join the Navy. “We decided it would be a great experience,” Krause said. A few weeks later she was on a troop train to Hunters College in New york for six weeks of basic training. After basic she received her assignment. She was being sent to work at the San Diego Naval Hospital. It took almost two weeks for the train to make the cross-country journey. Once there, Krause received more training at the Hospital Corps School. She learned to dress wounds, give injections, and treat patients. In April 1944, she was assigned to the delivery room.After six months, Krause was transferred to the blood bank. It was the largest bank in the U.S. Local Navy recruits came in to give blood. Four days a week, 25 recruits per day, they gave their blood for use at the hospital. Krause spent time with wounded men who had been shipped back to the states. She remembers one pilot who had been shipped back to the states. She remembers one pilot who had been badly burned. “That really stuck in my mind. His whole body was burned,” Krause said. Sadly, the pilot later died. Twice a year Bob Hope and Bing Crosby would come and entertain the patients. Together with a bank they would put on quite a show. Then she learned she would be included in the making of the 1944 movie, Here Come the WAVES, starting Betty Hutton and Crosby. Crosby and Hutton would sit down and eat meals with Krause and the others during the making of the film. Krause spent most of her time drawing blood and sharpening needles. “Now they have throwaway needles. We sharpened them on a stone and had to sterilize them again and use them every day,” she said. Waves lived in two barracks with 300 ladies in each. They had small cubicles and no civilian clothes. WAVES were always in uniform. She played on the hospital basketball and softball team known as the Gold Brick Ten. Krause was in downtown San Diego when V-J Day celebration began. The streets were so crowded the street cars couldn't run. It was really exciting,” Krause said with a smile. 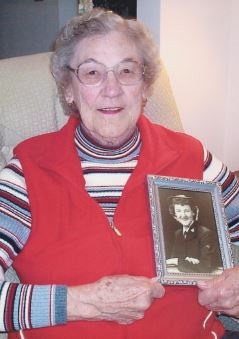 Job History After Military Service: In 1946 she was discharged and returned home. Back in Rockford she got married and got her job back at the factory. She alternated between working and staying at home over the years until she and husband Harold retired and moved to the Village in 1992. They have one son, Mark.

Present Location: Carrollton, Texas. I am now a resident of Atria, Senior Living.